The Latest From My Blog This high school athlete from Desert Ridge High School is such an incredibly motivated teenager and was so excited for his senior pictures! He played high school football all 4 years, but his passion is in the weight room. When I first met Colton I was blown away by all the ideas he had! First of all, he wanted athletic senior portraits that showed him doing what he loves.  Well, it turns out he’s also been nominated for Inspiring Teens Magazine and is in the running for the cover of issue 33!

A Special Note From Mom

Colton has always been driven to succeed. It didn’t matter if it was school, football, volunteering, friendship, his job, or family. He has always put everything he had into being all he can be. He has many achievements in my eyes but when you can be an influence on others is what really sets the achievement apart from other successes. The one thing in particular that comes to mind was not only a personal achievement but it helped others by inspiring them as well. Colton was a tall skinny kid starting off freshman football. They said he was too little to play Defensive End but he was going to do whatever it took to play this position. His freshman year he played and was the starter about half way through the year. After the season ended he went on a mission to get bigger, stronger, better, gain weight and muscle. He gained 40 pounds by the next season and has never looked back. He started every game from that point on. He now weighs 215 and is going to play at a prestigious academic college at the collegiate level. While on his journey he guided, tutored, and mentored the other players along the way. He was not only their team captain but their leader that inspired them to be all the can be. He became the highest academic level player that the school has had and looked at by the coaches as the most committed and inspirational player. Life is not only about achievements but inspiring others a long your journey. When creating a session around a senior’s passions, we find ourselves in all sorts of places and this time was no different. Our first stop of the day was the weight room which was so exciting because I had no idea what to expect in that location. Colton did not disappoint! He was willing to try anything and everything and was an amazing sport with all of my ideas. As usual, some worked better than others but it was here that we were able to create some of his favorite images. This is Colton. His mom suggested he take his shirt off to be more authentic to what would be his normal experience in the weight room, and we were mindful to pay tribute to his hard work and dedication and not diminish the perseverance and energy he brings to that room daily. These images were meant to convey his love for weightlifting and football, and we accomplished that and so much more. I found Colton’s humble attitude so refreshing. He’s extremely proud of his sport as are all of my high school seniors. Celebrating accomplishments, interests, and personalities are what senior pictures are all about, and trust me when I say that Colton has worked so hard for his success! 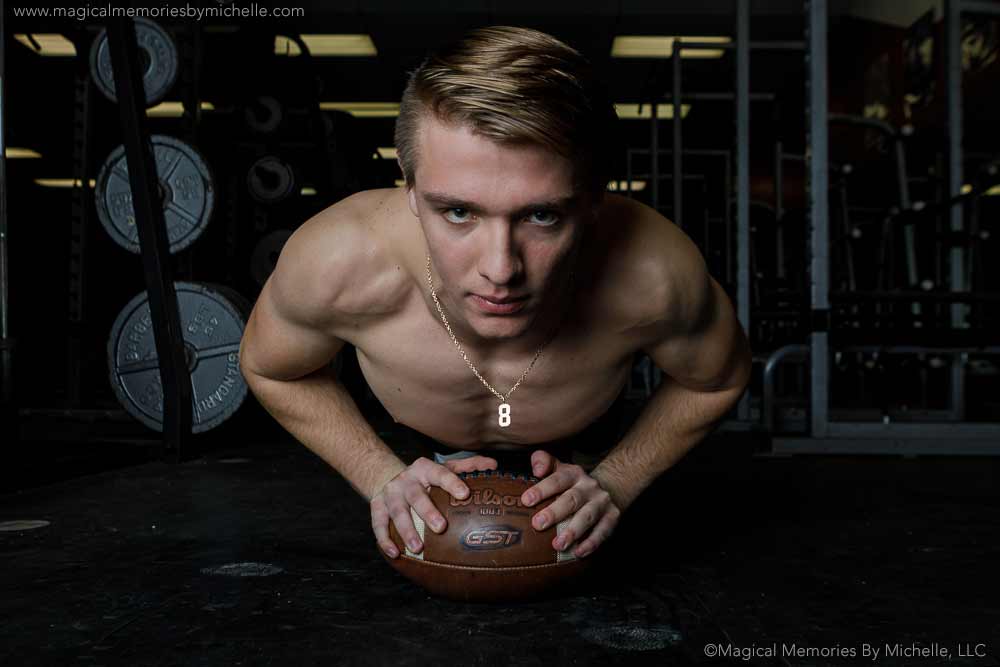 I love that we were able to capture a portion of the wall for this image. Colton was great at helping me place weights and telling me if something didn’t look right. I love collaborating with my seniors to get exactly what they want. I’m not an expert at every sport and hobby, so having the extra guidance allowed me to be creative and produce images I knew Colton would love! Then at the field house we got some great keepsake images that will remind him of all the hard practices, long hours, and amazing games spent here! Capturing movement and different angles is something I do at every session to be sure we have a good variety in your gallery. Keep in mind…this is only the first hour or so of Colton’s session! From school we drove into Chandler for two more locations! 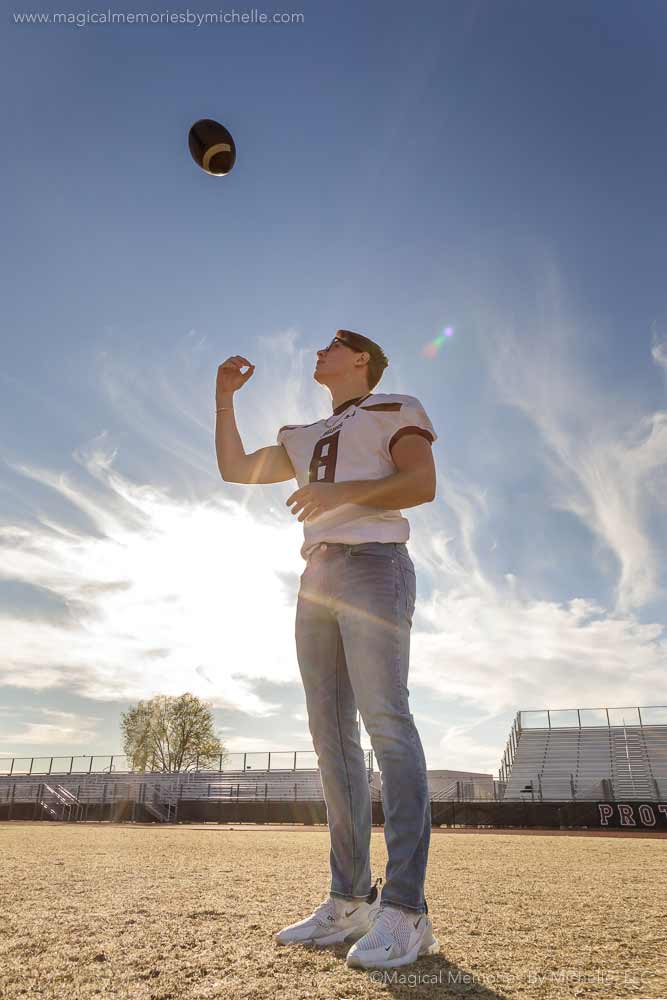 Portraits at Your High School

Now scheduling senior pictures for the Class of 2021!
Freshman, sophomores, and juniors, sign up to get on the waiting list!
www.magicalmemoriesbymichelle.com
(480) 779-7797

Hey there! Want to catch up on the latest, see where I’ve been photographing, and get some great ideas for your photo sesh? You’re in the right place. My blog is updated with some of my favorite photo sessions, hilarious stories, and insights you’ll want to know before it’s time for your big day.

This doesn't happen nearly often enough, but if th

Don't take my word for it...check out my Google re

How many outfits should I bring? Well, if you look

Yep, I guess it was worth doing a sunrise photo sh

I have wanted to play with colorful fruit slices f

Warning!!! If you hold fruit near your eye, don't

Beautiful Tally, one of our new 2021 seniors! Such

We'll be restarting our Teen Squad soon, so if you

Today is National Bikini Day! So today we celebrat

The best part of doing senior pictures is meeting

Happy 4th of July!! 🇺🇲 Enjoy your evening, b 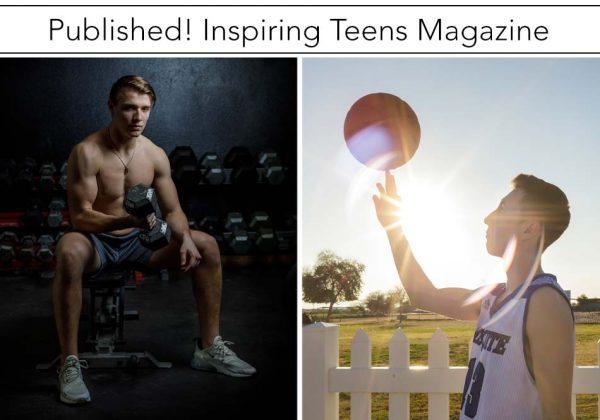 When you schedule your senior pictures with Magical Memories by Michelle, did you know that you might be published in a national magazine? We’ve had many images featured on social media and our seniors have been published in Senior Year Magazine, Modern Teen Style, Senior Muse, and Inspiring… 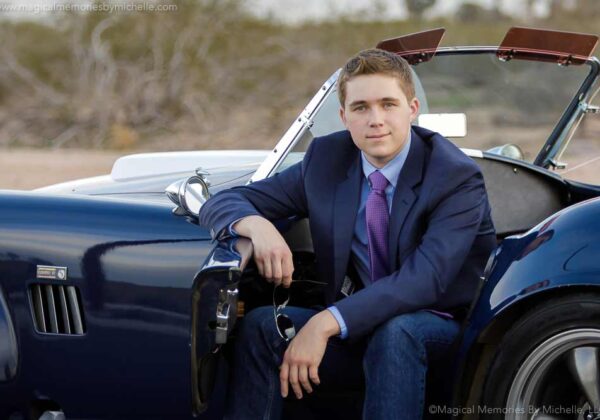 What to Wear for Senior Pictures | Formal Outfit Ideas for Guys | Mesa, AZ

As a senior portrait photographer, I used to tell teenagers to just choose comfortable clothing. However, after a few years I started having guys choose suits, blazers, and ties as one of their outfit choices and they looked amazing! The first step was to choose a great retailer that specializes in… 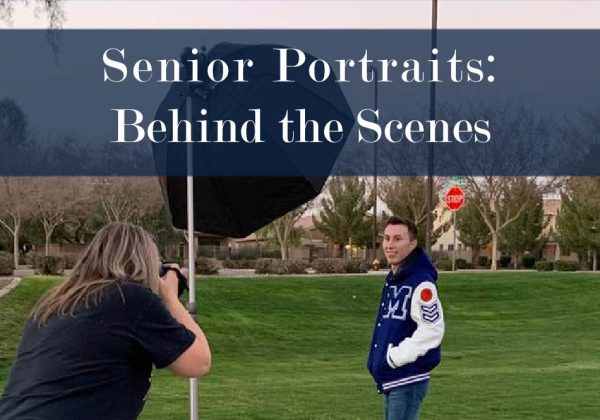 Everyone wants to know—“What in the world actually happens at a photo shoot?” I’m about to give you the inside scoop so you’ll be ready to tackle your day with enthusiasm and kick the nerves to the curb. Your day in front of the camera is going to be all you imagined…